In the lead up to our event on Tuesday July 10th 2018 – Blockchain and the future of the for-purpose sector –  we have put together a visual guide of blockchain basics for attendees and those interested in learning more about the basics of blockchain. Follow the image links to find out more!

Blockchain is a technology that facilitates secure online transactions such as exchanging money or updating a digital record without the need of an intermediary body. It is an uneditable and therefore incorruptible digital audit trail. Blockchain is a type of ‘distributed ledger technology’ which is explained in a little more detail below.

How does it work in a little more detail?

What is unique about distributed ledger technology system?

Blockchain is a disruptive technology trend that enables a shared, authentic, decentralised ledger.

What are the other features of distributed ledger technology?

Blockchain is one type of distributed ledger technology. There are lots of different solutions, and here are the common features:

What is a distributed system? 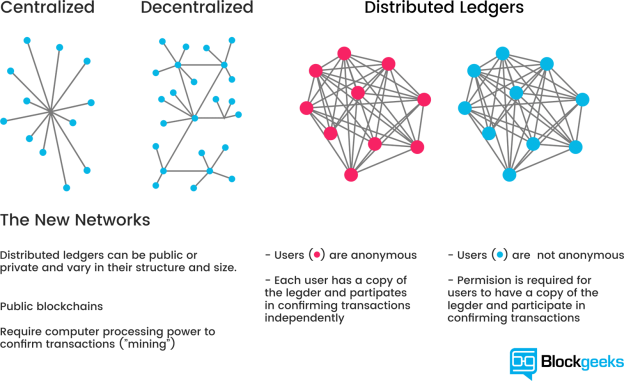 A peek inside a blockchain block: the fingerprints are unique to the block’s contents (Bitsonblocks)

What are the different uses of blockchain technology?

Where to start! Possibilities are endless (basically anything that involves an exchange, agreement, or recording and updating information). Current focus in the development sector is around digital identities, banking the unbanked, and improving services to vulnerable people. Broader than traditional development work, but still in the ‘for purpose’ space we are seeing blockchain tech help to combat election fraud, as a framework for renewable energy distribution, and to strengthening supply chain management and transparency.

Here are some of the broader commercial applications:

Blockchain use cases in retail

What is the difference between blockchain and cryptocurrency?

Psst – we’re not going to talk about this at all at the upcoming event! Just mentioning it because blockchain is usually in the news because of Bitcoin and other cryptocurrencies.

If you have any suggested resources, including articles, diagrams and videos, please suggest them via the Comments section below.

Questions? Comments? We'd love to hear from you Cancel reply